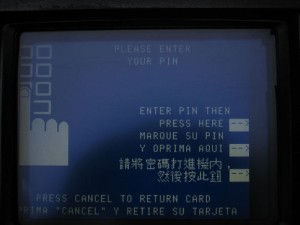 ATMs can lead to a financial nightmare if they've been tampered with.

All too often expats prove easy targets for financial fraud. They stand out in the crowd and are  often much wealthier than locals. A perfect example is a recent spate of fraud cases in Thailand, where numerous wealthy expats have lost thousands of dollars to financial criminals.

The Phuket Gazette reported the expats were targeted by a mix of con men and hacked ATMs able to steal account information–a worrying trend for any expat paradise.

ATM theft is on the rise, with all banks reporting similar incidents. Our head office in Bangkok is currently working on defensive measures. In the meantime I advise people to use ATMs either inside or at the front of the banks. We recommend that our customers use Kasikom ATMs only as they are all fitted with an anti-tamper system to prevent unauthorized modification.

With this in mind, we offer a few more tips for ATM safety:

To avoid criminals who may be lurking near ATMs:

Fraudsters and other crooks invariably look for the easiest targets. By following these tips you’ll make yourself a tougher mark, which is the best way of ensuring you (and your money) stay safe abroad.