What happens if Greece leaves the euro? 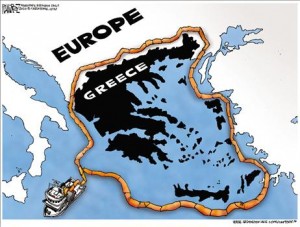 The eurozone may be inching toward its demise.

The European debt crisis seems to be grinding toward a decisive conclusion after a revolt within the Greek Prime Minister’s cabinet. PM George Papandreou had wanted to put Greece’s euro membership to a referendum, but a number of cabinet members–including his deputy finance minister–have refused. Several socialist MPs have also declared opposition to the referendum, destroying the ruling party’s majority.

“Take the latest bail-out or leave, and decide quick ,” has essentially been the response from Germany and France.

If Greece leaves the euro it is almost certain to default on its debt. In fact, one could argue Greece has actually been defaulting for some time now, though on the face of it bondholders have “voluntarily” taken losses in the interest of European solidarity.

So what does that mean for Greece and the euro? Is it 2008 all over again? Might the sky actually fall?

The Guardian’s Polly Curtis has surveyed a number of scenarios put out by different research outfits:

As you can see from the above, really only one thing is certain, and that’s that nothing quite like this has ever happened before. All eyes are going to be on Europe in the next couple days. Unsurprisingly the common currency has been in retreat all week, falling 2.6% against sterling, 3.07% against the dollar and 0.6% against the Japanese yen.