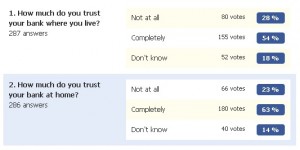 Expats have less faith in banks abroad, according to preliminary results from Just Landed and Lloyds' Expat Banking Poll.

The preliminary results of Lloyds’ and Just Landed’s Expat Banking Poll are in, bringing  a couple surprises with them.

So far respondents have shown a strong desire for more secure investments, even if it means sacrificing returns. This extends from investment portfolios down to current and savings accounts.

The poll’s Facebook page provided some additional insight with several additional questions. One asked whether expats would sacrifice interest if it meant keeping their money safe. 69% said yes–another 19% said yes but on the condition that other bank charges were lower.

Unsurprisingly, a majority of expats also indicated they would rather keep their money in British pounds than euros. More interesting was that many prefer the euro to the US dollar. Given a choice between British pounds, euros, gold, US dollars, Indian rupees, Australian dollars and “maybe spending,” 18% of expats picked euros as their investment of choice. Only 6% said the same for the dollar.

Our 3 key takeaways so far: