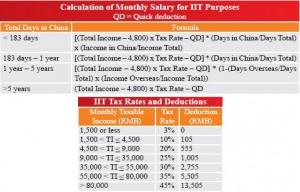 China continues forging ahead with tax reforms, raising the hackles of expats all over the country. The new social insurance tax, for example, is devouring 48% of some expats’ salaries, without providing much in the way of added benefits.

Expats in China are liable for IIT if they meet any of the following conditions:

IIT filings are due withing 3 months of the previous calendar year (e.g. by March 31st, 2012 for 2011). And there’s major incentive for paying up on time: penalties can be up to 5x the original amount!

Unlike many western countries, income tax in China is based on the expat’s monthly salary, minus a standard deduction of RMB 4,800 a month. The tax rate itself is progressive, ranging from 3-45%.

The most common exemptions hinge on the amount of time someone has spent in China. Foreigners with less than 90 days in China are exempt from IIT if they’ve been paid by an overseas entity. For expats whose home countries have tax treaties with China that limit is extended 183 days. Those who stay longer are liable no matter who pays them.

An important exception applies to senior managers, who must pay income tax regardless of where they’re from or how long they’ve spent in China. The broad definition of senior management, according to China Briefing, includes “individuals who do not hold a title such as manager but carry similar responsibilities or have a great influence on business operations or decisions.”