Your best defense against an Incredible Shrinking Euro 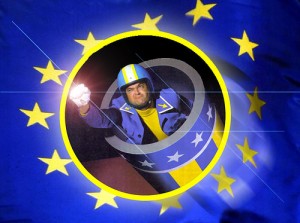 In lieu of a financial superhero, expats can use forward contracts and currency options to protect themselves from a falling euro.

Expats paid in euros are slowly but surely bleeding value as the common currency falls.

Similarly, those living in troubled economies like Italy and Greece may want to protect themselves against the possibility of a euro exit and currency devaluation. One way is to park money in accounts denominated in safer currencies like British pounds or American dollars.

In both cases they are at the mercy of foreign exchange risk.

It’s no surprise then that more and more expats are looking to hedge against that risk. Jeremy Cook, Chief Economist at World First, told us:

Some clients are taking action to manage their risk, they are very sensible to do so. We’ve seen more private individuals come to us in recent weeks looking to fix rates in advance.

Most expats will want to fix their exchange rate using a forward contract. This allows them to buy a specific amount of a currency at a predetermined time in the future at a certain rate.

Say, for example, you are paid in euros but transfer some money into a sterling-denominated offshore account for savings. If you are worried the euro will decline further against the pound, you can arrange a forward contract for the amount you usually transfer.

There is a downside to a forward contract, however: you don’t benefit if rates move in your favor. That is to say if you arrange to buy euros at a rate of 1.35 per dollar in 90 days and the euro moves to 1.40, you still get them at 1.35.

As a result, foreign exchange firms have created currency options, more complex products that allow you to both protect yourself from a loss AND benefit from favorable currency movements.

Currency options typically require an up front premium–a percentage of the amount you are exchanging. But according to Jeremy these don’t usually break the bank:

The fees are more reasonable than a lot of people think. For a World First Protection Option the usual commission is 1-5%. Of course exact fee amounts depend on the currencies, volumes and timeframes involved. Many expats don’t like paying a premium, however. In that case there are a range of options that carry no premium, but limit the amount of upside you can get in the event that the markets move in that direction.

At the end of the day, it’s absolutely critical to look at fee structures in relation to market movements. These days it may be well worth paying a 5% premium for a Protection Option, but the same might not hold true in less volatile times.